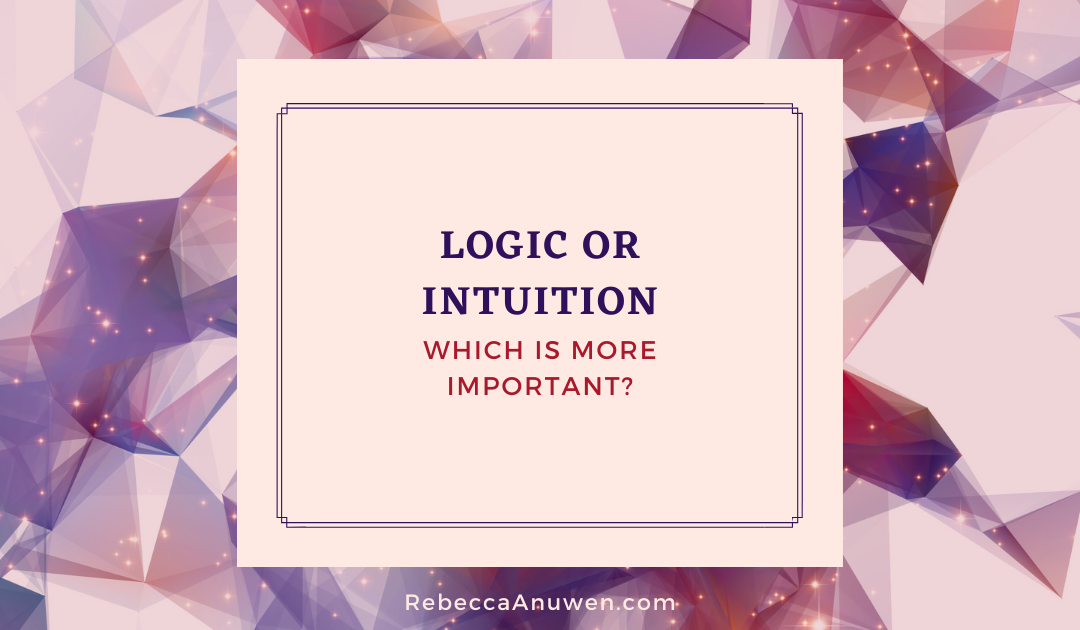 Logic or Intuition, Which is More Important? 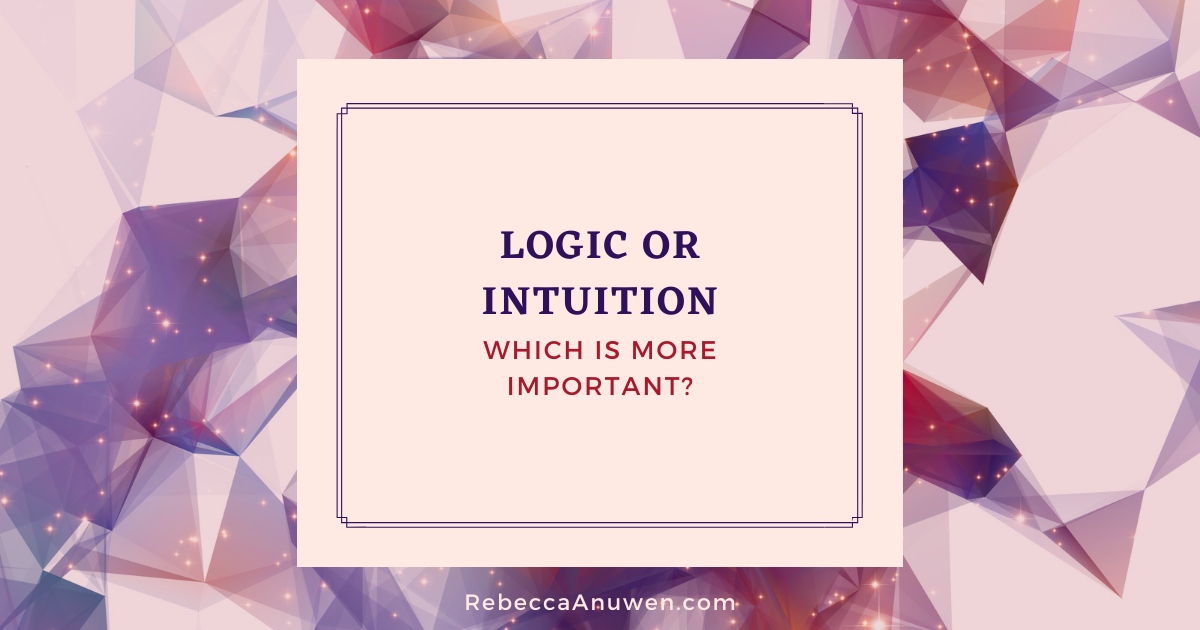 We love to gather the information, and the more detail we can uncover, the better. We pore over it, analysing and comparing it to other data. Then we make a choice, confident that it’s right, because we made it logically and rationally.

Whereas we view intuition very differently. We gather intuitive information through an inner ‘knowing’ or sensing. It’s something that we can’t often explain with reason and logic. We can rarely prove the information at the time we receive it. Sometimes, it doesn’t even make much sense.

So we often view intuition as ‘creative’, or dismiss it as ‘woo woo’.

That’s probably why society tends to value logic over intuition. If something can be ‘proved’, people feel safer and more confident basing their decisions on it.

Making a decision logically can feel safe, as it uses information that comes from ‘outside’ of ourselves.

Someone else (often many someone else’s) has interpreted the information and then validated the data.

So trusting logical information means putting your trust – and the overall responsibility for the information – onto someone else. Sometimes that’s necessary, but often it’s not.

Intuition, on the other hand, comes from within. We receive the data, we interpret it and then we validate it too. The whole process is just down to us, with no-one else involved.

So trusting our intuition is about taking full responsibility for ourselves and trusting our own inner-wisdom, choices and actions.

Why it’s so hard to trust our intuition

Trusting ourselves is often harder than it should be because we’ve been taught to fear failure.

Fear of failure often disguises itself as feeling ‘not good enough’ or being a people-pleaser. And both of these patterns turn our attention outside of ourselves to seek external validation.

Meanwhile, it’s socially acceptable to fail – as long as you’ve followed the logic.

If you’ve done this, you can ‘blame’ the logic. You can reason that the data must’ve been faulty. So it can’t be your fault – all you did was follow the data that you expected someone else to have at some point ‘proved’ or reasoned to be correct.

If, on the other hand, you used your intuition – or magic or creativity – to find a solution, you might be seen as unprofessional, irresponsible or even indulgent.

That’s especially true if following your intuition or creativity didn’t turn out the way that you thought it would. In that case, well… it’s your responsibility for being the person who tried something new, the heretic who dismissed the logic.

You often see this play out in traditional businesses

In business, things usually get done the way they’ve always been done, even if that means they don’t get the best results. People want to keep their jobs, so they follow the logic. If the logic fails, society (and very probably their boss) blames the logic, rather than the decision-maker.

And in that environment, relying purely on logic makes sense. After all, if someone in a traditional job tried something creative or followed a hunch that didn’t work out, they know they’d be blamed. They might even lose their job!

Making a decision based on intuition puts all the responsibility squarely in their court.

Yet, when people are afraid to speak up and share their creative ideas and their intuitive wisdom valuable insight can be missed.

When toxic workplace cultures play the ‘blame game’, people are reluctant to put forward new and innovative ideas, and opportunities to make things better and more efficient are lost.

Dismissing your intuition closes off your options

What often happens when we have an intuitive insight is that, instead of trusting it, we try to find the logic in it. We seek someone else to validate that insight.

This waters down our intuitive wisdom, leaving it (and us) confused and lost. This is a problem because we’re not supposed to treat our intuition with the same scrutiny as we’d treat logic.

Scrutinising your intuitive insights leads you to doubt and even dismiss the information from your inner-most self. This can then result in suppressing your creative thoughts and ideas, and not believing in the magic and possibilities.

As a result, you limit the number of ideas that you can consider. You miss out on a huge amount of information that could hold the solution you seek, including totally new ways of viewing your situation or doing things.

Plus, when you rely purely on logic and reason, it’s easy to dismiss or ignore information and options that don’t fit your logical narrative.

Intuition and logic have equal value

When it comes to logic and intuition, we shouldn’t value one more than the other.

It’s not ‘one or the other’. It should be both – and often both at the same time.

Intuition can often spark an idea or give you creative insight and a new way of looking at things. This spark of an idea can often inspire someone to start down a path of logically proving idea concept.

For example, I heard the phrase ‘scientific intuitions’, where the scientist may have a flash of insight as how to solve an issue they’re working on. Then they use their logic and reason to prove their theory or solve the problem they’re working on.

Logic and reason can bring an intuitive insight into reality.

Instead of switching your logic ‘on’ and your intuition ‘off’ (or vice versa), what if information continuously flowed between the two like the flow of an infinity sign? What if you allowed both to constantly communicate with each other?

Using logic AND intuition gives you the best of both worlds.

It allows you to find creative solutions to issues you face, and then create a tangible way of making those solutions happen.

Want to connect more deeply with your intuition?

If you’d like to hear the voice of your intuition more clearly (or trust what it tells you when you do hear it), check out my course on Awakening Your Intuition 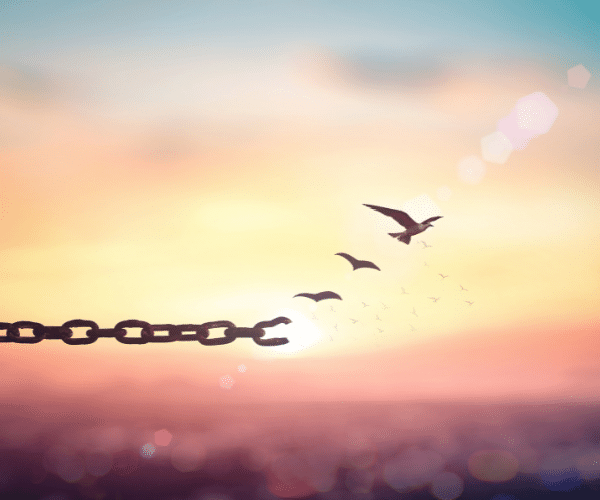 Trust yourself as you develop a clear understanding of how your intuition speaks to you and have confidence to act on it. 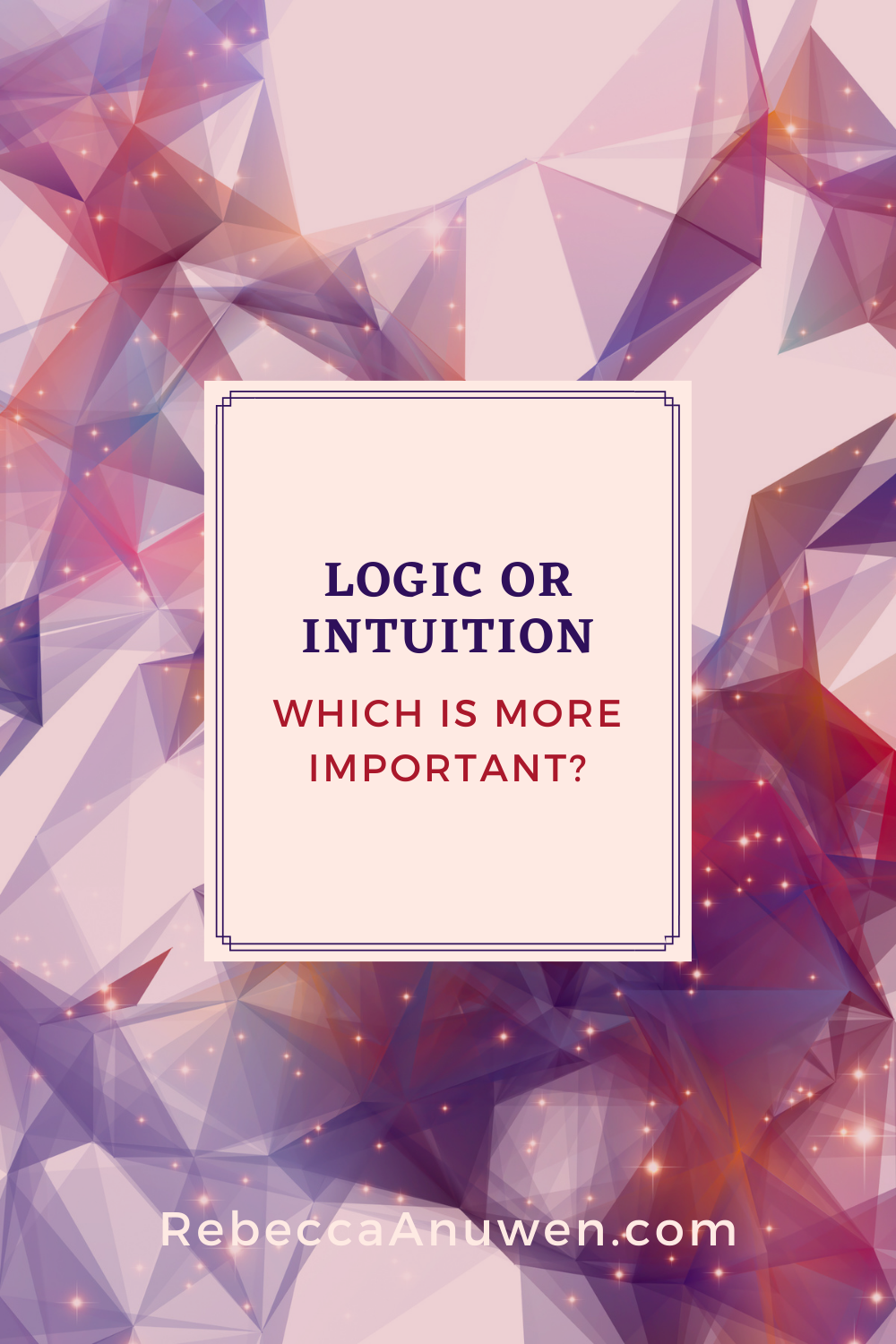