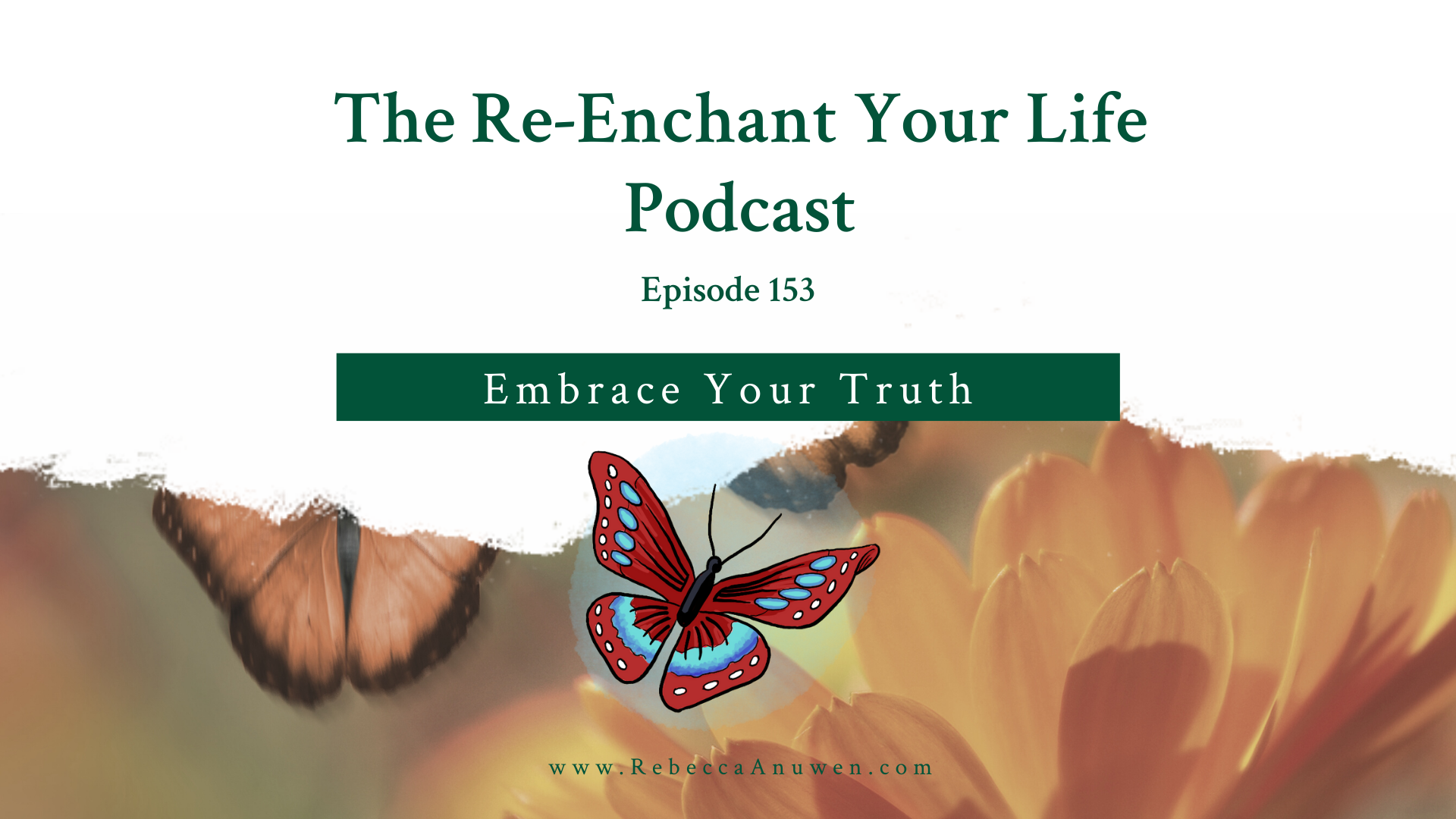 Welcome to The Re-Enchant Your Life Podcast with me, Rebecca-Anuwen.

I’m back with some inspiration and an intuitive twist, as we use oracle cards and charm casting, to answer those questions you have.

On the last episode, we looked at the symbolism of The Crystals and the importance of remembering that you don’t have to do it alone. Today. We move on to the card The Butterfly, and you’re reminded to embrace your truth.

Where in your life have you been avoiding your truth? Perhaps you’ve been hiding your true dreams and desires. Maybe you’ve been playing small and are ready to name and claim what you really want in life.

Take a moment to ask your question about embracing your truth.

Then we’ll look at the meaning of the SHEro Toolkit card, taking wisdom from the guidebook, and I’ll draw a second card so that we can explore how that card adds more meaning to the first card. And then I’m going to draw a charm, allowing us again, to add a deeper layer of meaning, to the message.

The Butterfly – Embrace Your Truth 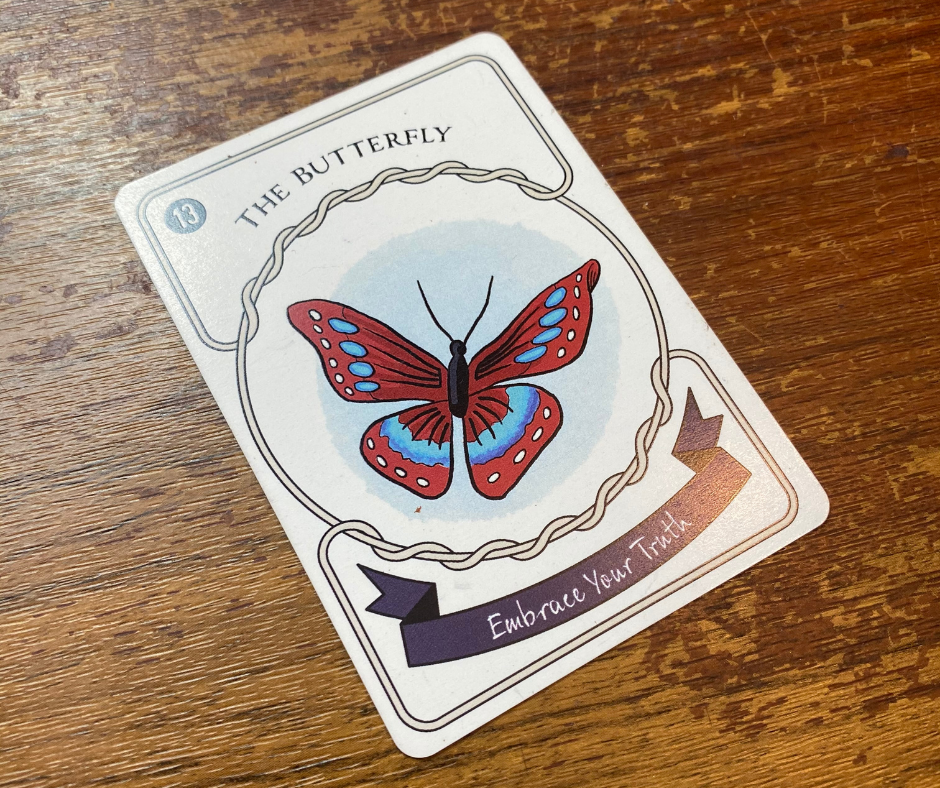 With your question in mind, about how to embrace your truth, the guidebook says:

“You are here to express the unique way in which you see the world, as only you can.”

Butterflies are powerful symbols of transformation. They accept the truth of what they are, as their environments and bodies go through the process of deep, irreversible metamorphosis.

The Butterfly reminds you to embrace your truth it’s time to live your truth out loud in the world.

Ignore the people who tell you not to take risks, even if they mean well.

Ignore the people who tell you not to draw attention to yourself, even if they speak from their own painful experiences.

Ignore the people who tell you to play small and don’t value your contribution, as they probably don’t value their own.

Deep inside you, there’s a part of you that knows what you’re here to do. It wants you to stand taller. To take up space. To speak from your heart. To align your actions with your truth. It’s time to take up space with the truth of who you are, as you unapologetically embrace your whole self.

The SHEro Action suggests: Notice where you aren’t living your truth.

How can you give yourself permission to be more you to live your truth out loud in the world?

Along with the butterfly, let’s see what other message the toolkit cards have for us.

I’m just shuffling the cards… and the second card is The Bridge. 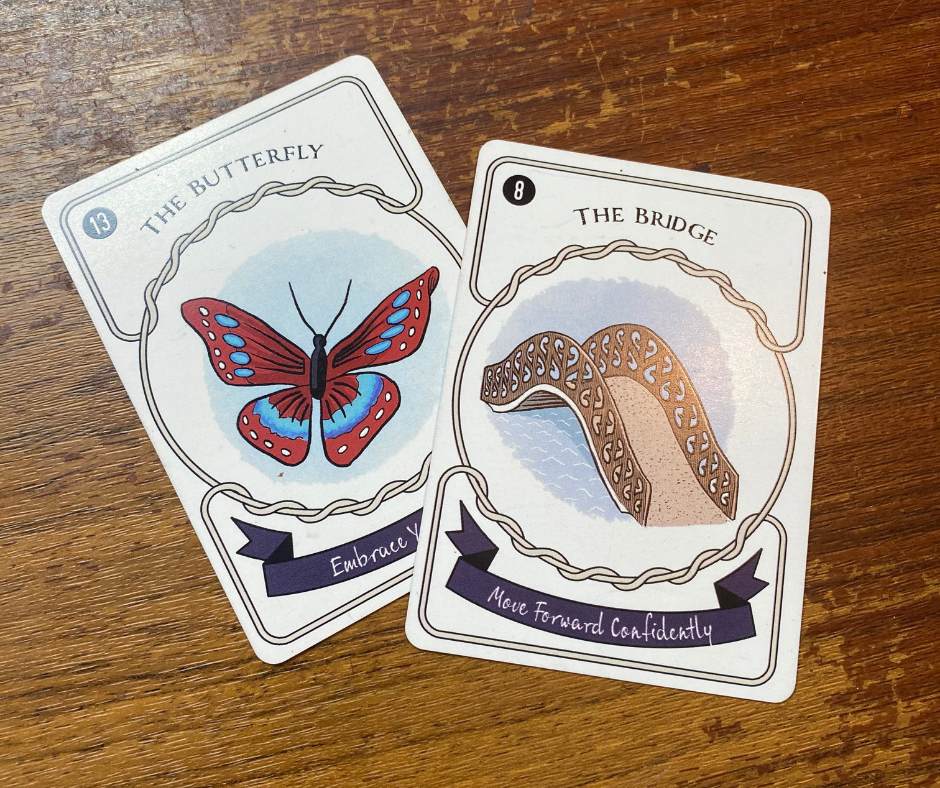 The Bridge reminds you to move forward confidently.

When we’re talking about embracing your truth, you may well be thinking to yourself, but Rebecca, I don’t know what my truth is.

I can’t remember my dreams and my desires, which is very common because people often have spent so long prioritising other people over themselves, so long pushing down their dreams and desires, and hiding them for fear of being seen as selfish, for fear, or for thinking that they have to prioritise other things first; maybe an education, maybe a relationship, maybe family, maybe any kind of social construct.

Does that sound exciting? Or you’re like, Oh my goodness, I’m not sure that I can.

I’m just going to pick a charm now to give us some additional insight into The Butterfly and The Bridge. Both of those actually very moving cards, you’ve got the butterfly spreading its wings, and expanding. It’s light, and it’s free. It’s gone through the change. It’s gone through the metamorphosis to become all that it can be. And it’s given itself that sense of freedom. So that card has the movement and the flight.

I’m now just going to have a look, rattling my charms here… Alright, what’s coming up?

It’s three wise monkeys, you know, the see no evil, hear no evil and speak no evil monkeys. 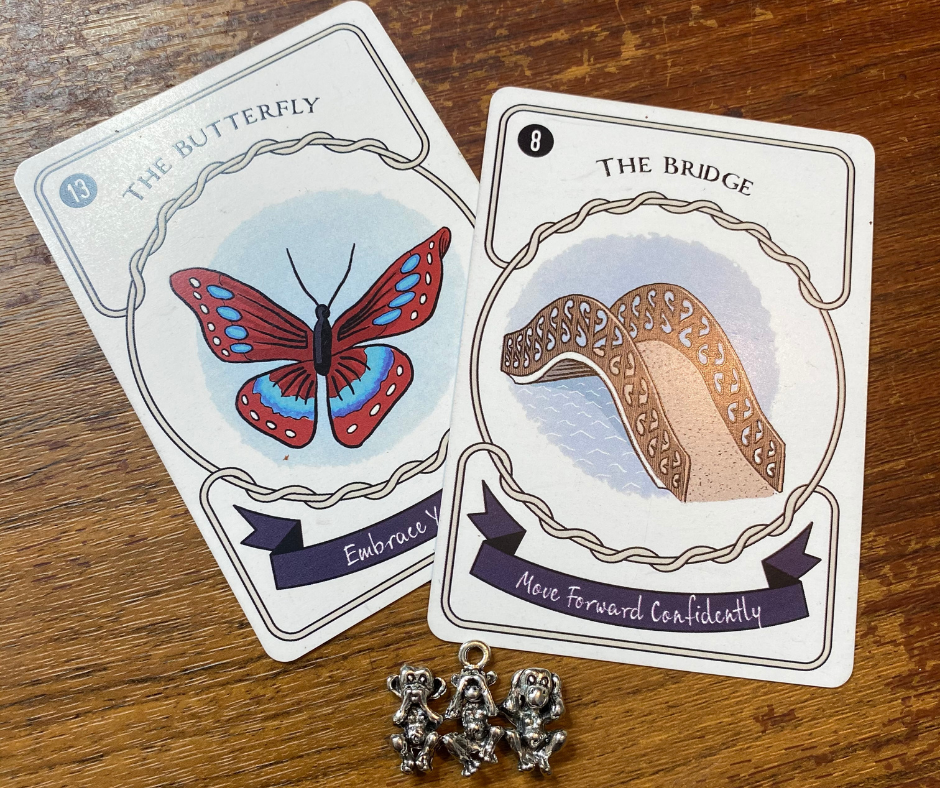 If you, again, think of this embracing your truth, moving forward, confidently. And it’s, to me, when I look at these monkeys right now, it’s about conscious choice, conscious creation, it’s about the ability to respond rather than react.

The first monkey has its hands over his mouth and it’s symbolising to consciously choose your words. Your words are the ultimate spells. What we put out into the world. You speak and send that vibration rippling around the world and in our own lives. If you’re saying; ‘Oh, I can’t ever do that’. ‘Oh, it’s really hard’, and you’re using language like that. well, guess what? That becomes your story. That becomes a spell that you’re enchanted under.

If you change those words to; ‘it’s challenging, but I’ve got the support and the tenacity to keep going’, or ‘you know, it’s always been that way in the past and now I’m choosing a different way forward’. And you start talking positively about yourself. You start using the language of hope and possibility, that’s not to pretend everything’s perfect and not to pretend things aren’t difficult, but just to give yourself the opportunity to step into the place of potential, rather than having a door slammed in your face as if it was already done.

The next little monkey has got his hands over his eyes. We’re embracing your truth, really see your truth, not to hide it from yourself and not to hide it from the world, but to allow yourself to see you in your your highest version of yourself. Maybe that’s uncomfortable for you to see yourself in that position, to know that you can do, be, and have, or at least work towards being, doing, and having, what you truly desire in the world.

And then the final monkey has his hands over his ears. That brings to mind to two things. The first thing that comes to mind is shutting out the noise of other people’s judgments expectations, and second, to ask yourself, where are you shutting out your own wisdom?

So, that’s what those monkeys mean to me. When you then look at embracing your truth, moving forward confidently, and making sure that you are communicating with yourself in a very clear and honest way, because you know, we’ve mentioned before about the way that you learn to trust your intuition is that you become honest.

You become a person of your word to yourself first and foremost, because we know that we don’t trust people that lie to us, but if you’re lying to yourself and saying, Oh, I don’t know what I should do with my life. But actually you’re just afraid of the repercussions of the choices that you’ll have to make, so that you can do what you want to do, well, that then becomes dishonest.

Today, as you embrace your truth, do so confidently knowing that you have your own back because you’re a woman of your own word.

Notice how they feel for you because what you feel, and what you think is far more important than what I think.

Thank you for joining me.

I’ll see you again very soon for another episode of the Re-Enchant Your Life podcast where we’re going to carry on spiraling, deeper on this journey, helping you to trust your intuition so that you can make better choices.

Until then, I’ll see you again very soon.

Get the Re-Enchant Your Life podcast direct to your inbox

The SHEro Toolkit Oracle Deck has been designed to support you, helping you to navigate your way on Your SHEro’s Journey as you awaken your inner power. 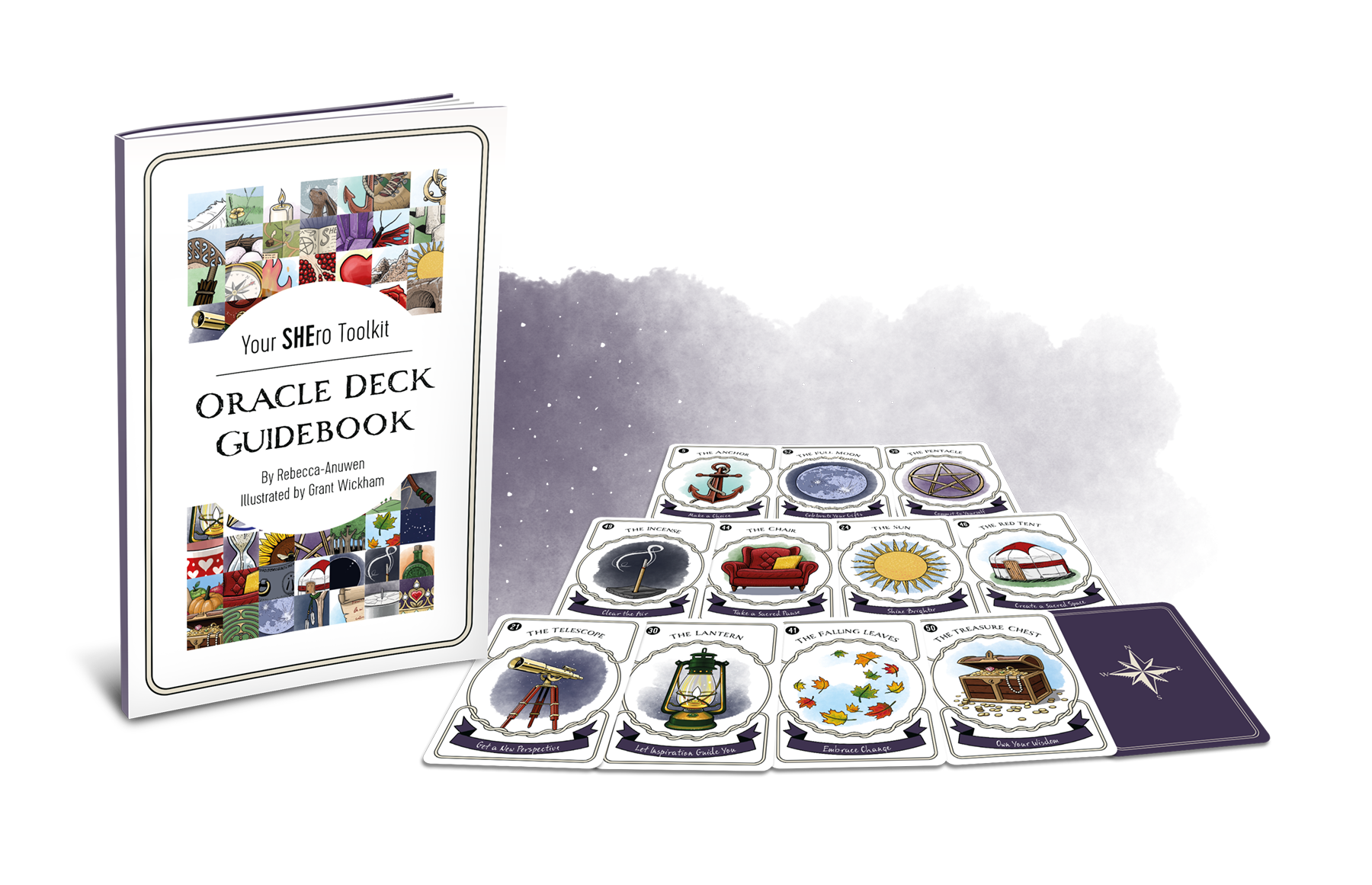